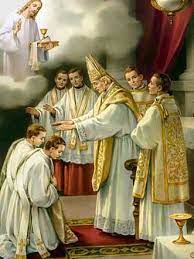 Dunnellon- Fr. Kevin Patrick MacGabhann, (nickname Johnny), 86 years old, of Dunnellon, FL passed away mid-afternoon on Wednesday, March 2, 2022, at home surrounded by family after a several year battle with Dementia. Kevin was born in Dublin, Leinster, Ireland on February 1, 1936, and devoted his life to serving Christ as a Catholic Priest in the Archdiocese of Miami since 1963 for over 50+ years throughout different communities before retiring and continuing to serve the Dunnellon area as needed. Kevin loved motorcycle rides, boating, fishing, stock car races, bowling, traveling to Ireland, Colombia, cruises, restaurants, bands and karaoke, all with his son and best friend Carlos.

Kevin is preceded in death by his father Seamus, mother Evelyn, and brother John.

A private Family Celebration of Life will be held honoring Fr Kevin (Johnny) at a later date.

A memorial mass will be celebrated on Thursday, March 24, 2022 at 11:00 AM at St. John the Baptist Catholic Church in Dunnellon followed by a potluck repast in the church hall.

To send flowers to the family or plant a tree in memory of Fr. Kevin, please visit our floral store.