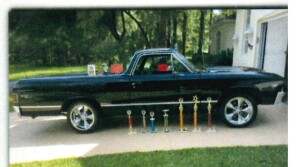 Raymond “Ray” D. McCown, 72, of Dunnellon and formerly from Oberlin, Ohio, died suddenly on Tuesday, July 7, 2020. Ray was born on March 5, 1948 in Pikeville, KY and he was the son to the late Lowell and Isa (Elswick) McCown. After living in Ohio for about sixty years and following retirement with General Motors, in 2015 Ray and his wife Margaret moved and made their home in Rainbow Springs. He enjoyed playing golf and attending and being part of classic car shows. He was looking forward to the new engine he and his sons were going to put in his 1967 El Camino, but Ray left way to soon.  Ray enjoyed life to the fullest and will be greatly missed by all his family and friends.

He is preceded in death by his son at birth, Ronald McCown; his two brothers and one sister.

Ray is survived by his wife whom he married in 1966, Margaret McCown, Dunnellon; his sons, Robert McCown(Daniela), St. Petersburg, FL, and Michael McCown, Asheville, OH; his daughter, Patty Hollenbeck(Eric), Williamsport, OH; his sisters, Audra Skinner, Elyra, OH and Margie Trendafilov of FL; his six grandchildren and one great grandchild.

There will be a public viewing on Friday, July 10, 2020 from 4-6 PM at Roberts Funeral Home in Dunnellon.

To send flowers to the family or plant a tree in memory of Raymond "Ray" D. McCown, please visit our floral store.